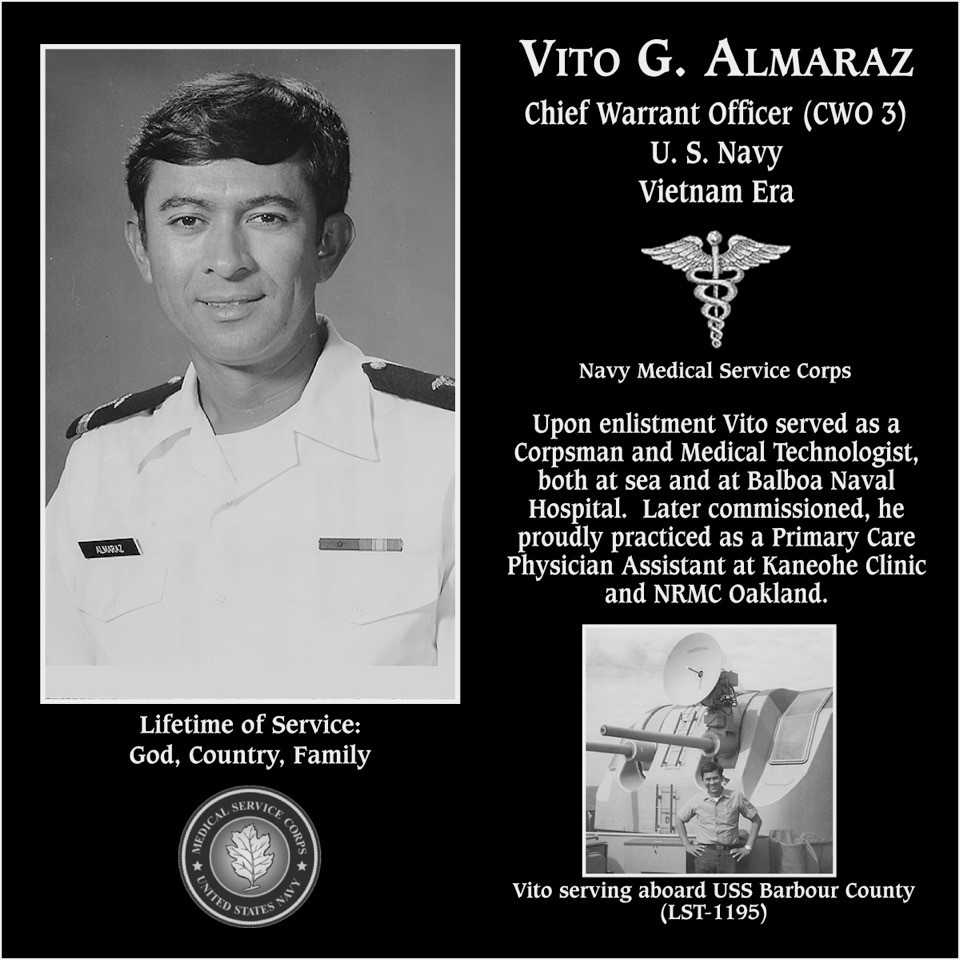 CWO3 Vito Gonzales Almaraz was born in Bakersfield, CA on June 15, 1945, the third child of Victor and Marcelina Almaraz. Indeed, when Marcelina was seven-months pregnant with Vito, she received notice that Victor, an Army Sergeant serving in Europe during World War II, was missing in action. Fortunately, Victor who had been captured by the Germans eventually managed to escape. After the war, his parents would go on to have 10 more children.

As a teenager, Vito studied classical guitar and also played rhythm guitar with a popular local band. After graduating from Bakersfield High School in 1963, Vito enlisted in the Navy, was sent to the Naval Training Center, San Diego for basic training, and was part of the 1964 graduating class of Company 63-388. He then attended Corpsman school in San Diego, California. His early duty stations included Taipei, Taiwan, and Honolulu, Hawaii

Vito attended Medical Laboratory School and later served as a medical technologist at Balboa Naval Hospital in San Diego. He served as an Independent Corpsman aboard the USS Barbour County (LST-1195) from 1973 to 1975, and enjoyed interacting and treating the many marines the Barbour County transported during military exercises.

In 1975, Vito entered the Physician Assistant program, attending the USAF School of Health Care Sciences, Sheppard Air Force Base, Texas for the first-year academics of the PA program; and the second-year clinical phase at the Naval Health Sciences Education and Training Command, NRMC, Oakland. He was fortunate to be mentored by several excellent physicians during his rotation through the various specialties. Commissioned in 1977, he proudly practiced as a primary care Physician Assistant at Kaneohe Naval Branch Clinic, Hawaii and NRMC Oakland.

Vito retired from the Navy with 20 years of service on January 1, 1984 as a Chief Warrant Officer, W-3. However, as a civilian, his career as a Physician Assistant spanned another 35 years, primarily in family practice and urgent care. During the late 1980s, he worked tirelessly to promote the nascent PA profession and served as President of the California Academy of Physician Assistants in 1989.

Vito’s lifetime of service extends to his family and friends. He married his wife, Rebecca Castro Almaraz, in 1974. He is a loving father of three: Charleen Davis Honey, Andrew Almaraz, and Danielle Almaraz; and a doting grandfather to his only grandchild, Daveena Honey. Additionally, Vito cherishes the lifelong friendships he formed while serving in the Navy.