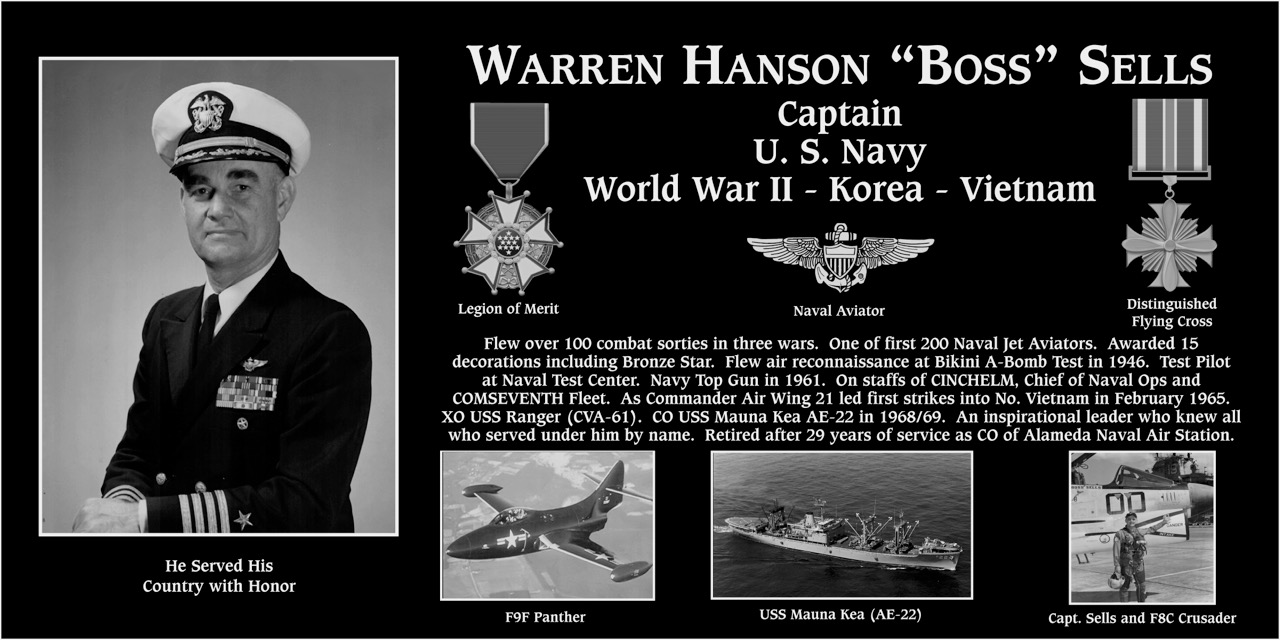 • Warren Sells was born 9/7/1923 at Burrwood in Plaquemine Parish, Louisiana.

• His father, John, was a boat captain in Lake Charles, LA.

• His first job was on a dredge boat creating the Calcasieu Ship Channel.

• He graduated from Lake Charles High School and attended John McNeese Junior College. He received a two- year degree in Mathematics in 1941.

• At the induction center, the lines were long. The shortest line was for the Army Air Corp, so he chose that one.

• He had never flown, but at Aviation Training base in frigid Minnesota he proved to be a natural, gifted pilot.

• Shortly after joining the Navy he married his wife, Theresa. They were married 66 years and had four children. Theresa passed away on 9/10/2010.

• He flew combat missions against the Japanese in 1945, flying F6 Hellcat Fighters.

• He participated in Bikini A-Bomb tests, flying photography and observations missions. No one knew what to expect. They wore welding goggles for eye protection. The force of the blast killed the engine. Fortunately, he was able to restart the engine.

• He was next assigned to Ryan FR-1 Hellcat Squadron on USS Ranger. The plane had an internal combustion engine on the nose and a jet engine in the tail.

• Soon after the all-jet F9F Panther was delivered to the fleet, he was one of the first Naval aviators to land it on a carrier.

• He then received an assignment as a Naval test pilot at Patuxent Naval Air Station. He flew with Alan Shepard, who would become a Mercury Astronaut. Sells passed on an opportunity to join the Astronaut Program.

• With the outbreak of the Korean Conflict, he became one of the first all-weather qualified pilots. Of 100 pilots on his carrier, he was one of six who could fly extremely dangerous night supply interdiction missions over North Korea.

• At the end of the Korean Conflict, Sells became a Squadron Commander flying Douglas A-4 Skyhawks. He now had accumulated 126 combat missions and was a Navy Top Gun pilot.

• Sells soon became a special weapons pilot at Sandia Base. The planes he flew could carry atomic weapons. As a precaution, he had to learn to speak Russian. He said that was the hardest thing he ever did.

• Sells would later use these skills as a translator at a meeting with Soviet Premier Nikkita Khrushchev.

• On February 7, 1965, as a squadron commander flying F-8 Crusaders on the USS Ranger, he led the first air strike over North Vietnam. For his service in Vietnam, he received the Distinguished Flying Cross and the Bronze Star.

• Having gone as far as he could go in the Navy as a pilot, he was told his future was in commanding a ship.

• As captain of the USS Mauna Kea (AE-22), Sells completed two tours off Vietnam. The ship established records for ammunition passed in 1968 and 1969. He had a crew of 350 men, and knew everyone by name. He was highly respected by his crew.

• The Mauna Kea received the Meritorious Unit Commendation for its superior service.

• At Alameda, a day did not go by without Sells being harassed by leftist demonstrators. The final straw occurred when he was kicked, spat upon, and knocked to the ground. He immediately returned to the base and submitted a letter of resignation. Sadly, this ended a distinguished 29-year career in the U.S. Navy.

• Of all of his duty assignment, he stated that he most cherished his time a CO of the Mauna Kea.

• Sells attended the 2009 Mauna Kea reunion in San Antonio. He presented a beautiful 3’ long, hand carved wooden model of the Mauna Kea to the assembled ship’s crew. He had hand crafted the model in its entirety. It is now a featured display at all Mauna Kea reunions.

• During his career, he earned 15 decorations, including the Legion of Merit.

• After his retirement he and his wife moved back to Lake Charles, and then to Kerrville, TX. It was there on 12/17/2017 that Warren Sells peacefully passed at the age of 94.