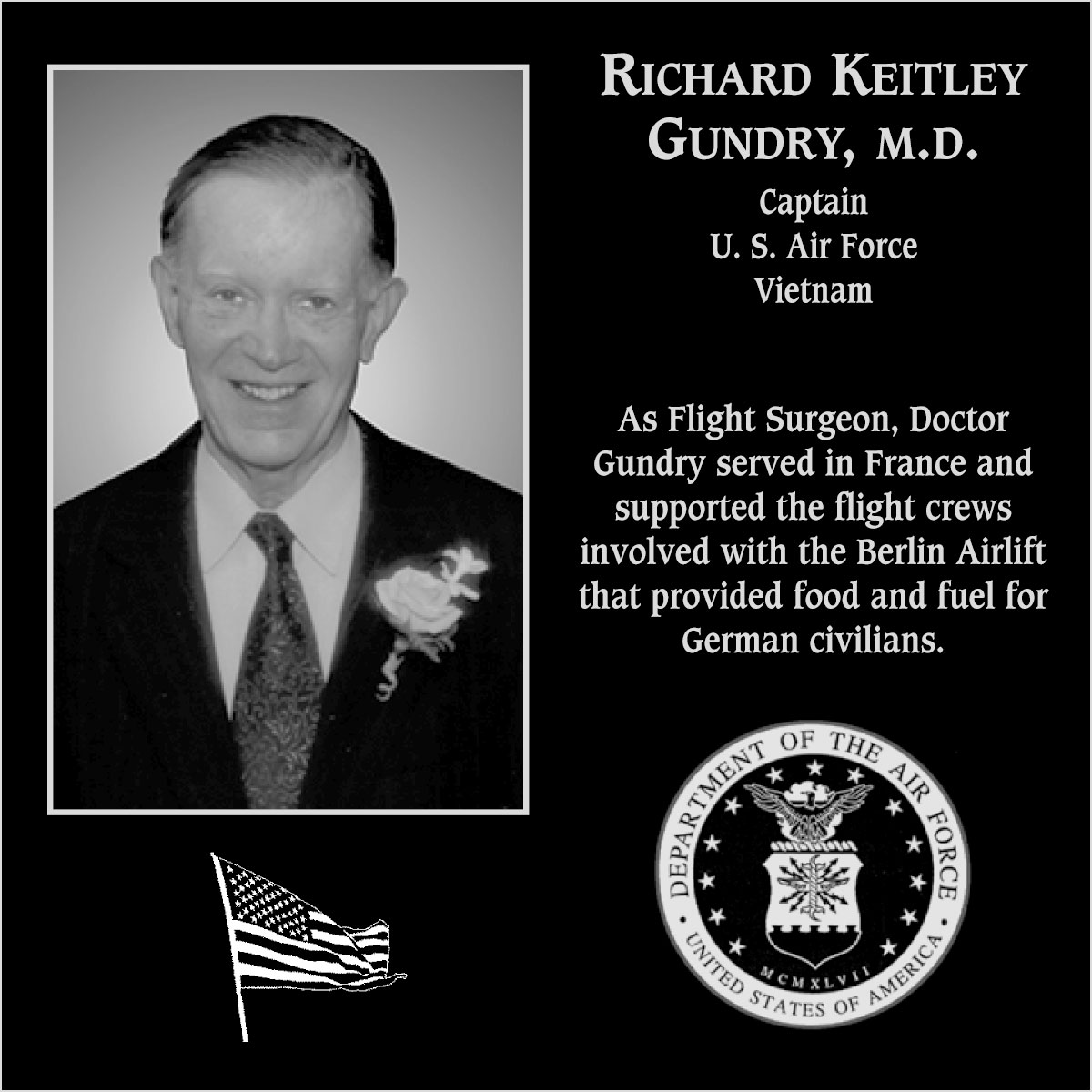 Doctor Richard Keitley Gundry died a quiet death in the hospital, with his wife Phyllis

at his side on February 21, 2020. He fought the good fight for more than three years

Dr. Gundry was born in Baltimore, Maryland October 11, 1931, the 4th generation of

Physicians in the Gundry family. His mother was Margaret Alexina Winterson and his

father, Dr. Lewis P. Gundry, would later become the President of the Maryland Board of

After receiving a baccalaureate degree from Haverford College in Pennsylvania, Dr.

on the Osler Service. His desire to travel to the West Coast was facilitated by Dr. A.

of Medicine at Stanford, and arranged a match on the spot.

One year later, his Residency in Medicine at Stanford was interrupted by service in the

Air Force. He went to San Antonio to train as a Flight Surgeon and was then assigned

overseas as Captain Richard Gundry serving during the Berlin Airlift. Many years later,

Dr. Gundry to commemorate his service in the Air Force.

When he resumed life after discharge, he completed his Residency in Medicine at the

Barbara (Barb), Alison, and John along with many beloved Labrador Retrievers. They

in the rural filbert and blueberry countryside outside Portland. Horses were always a big

part of the life of their family.

Dr. Gundry had Practices in Baltimore as well as Portland, Oregon, but also practiced

in Medford and Forest Grove, both in Oregon.

At about the time of his retirement from solo practice, Dr Gundry married Phyllis

Massino, a registered nurse, and moved to San Diego. The Gundrys spent a year on the

Navajo Reservation in Arizona and New Mexico, he, practicing medicine, and she as a

Once back in San Diego, Dr. Gundry started what he often called the most satisfying

practice of his career, as a house call physician. Truly, his career had come full circle, as

he well remembered doing house calls during his training at Hopkins. He saw hundreds

of patients over a span of 13 years and retired due to illness at age 87. He was a humble

doctor who was beloved by patients, nurses and staff, and patientsʼ families.

Dr. Gundry had many highlights in his life, the most special ones were: his position as

Captain of the Cricket team at Haverford; the fact that he was able to treat one of the last

living Navajo Code Talkers on the Reservation; his 50th Johns Hopkins Reunion, where

he reconnected with so many beloved friends and colleagues; and his lifeʼs adventures

with his children and grandchildren.

Trostel, and his four children; both sons are the next generation of Gundry physicians,

and both daughters are teachers. He had one step-daughter, Alexandra, and 12