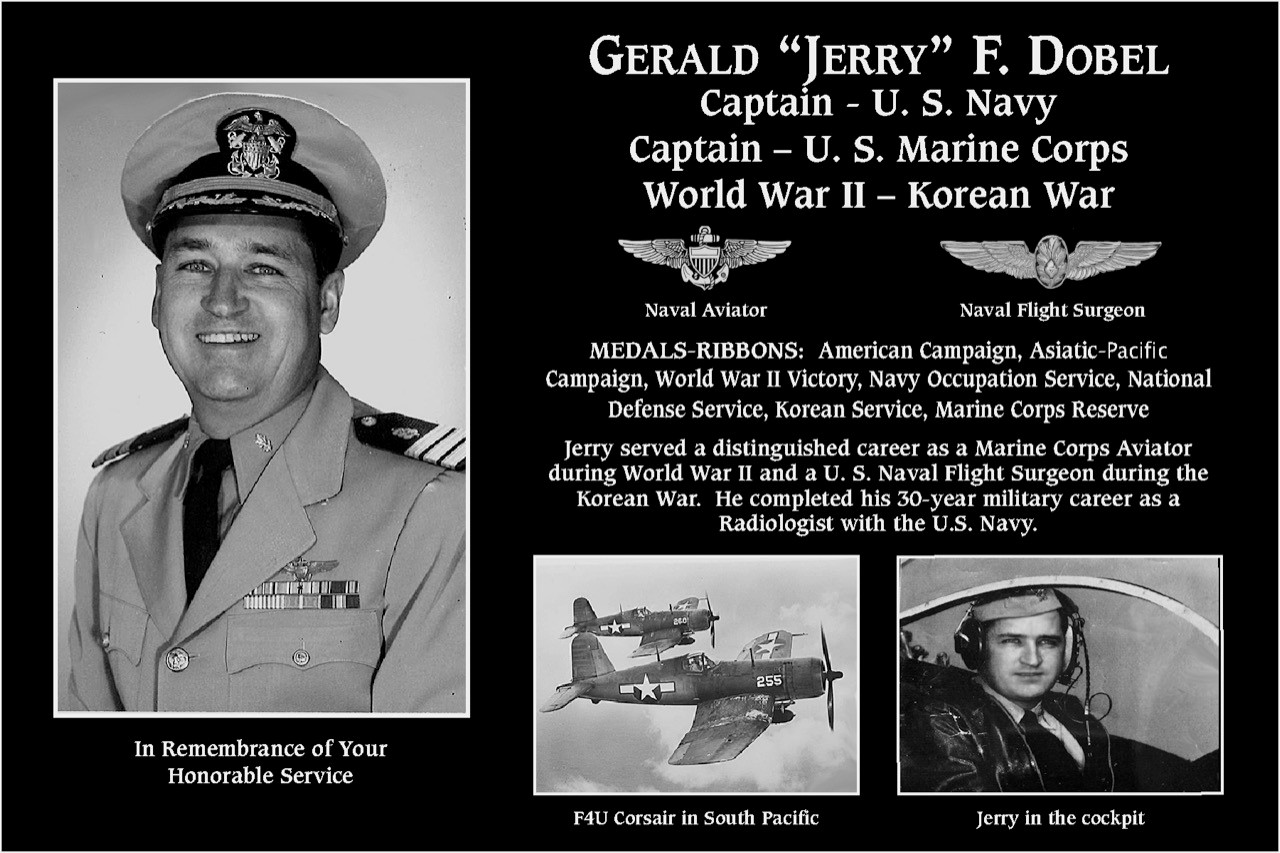 Jerry was born August 21, 1921 to Elmer Fredrick and Cecelia (Hain) Dobel in Kansas City, Kansas and was the 3rd of 5 siblings. His grandparents, Luke and Ellen Dobel, had emigrated from Ireland. Jerry spent his childhood and early adulthood in Kansas City. Prior to enlisting in the military at age 21 he was interested in a career as a Veterinarian, but his first job was selling Florsheim shoes door to door.

On July 29, 1942 Jerry enlisted in the Marine Corp during WWII. After boot camp he left for flight school in Corpus Christi, Texas. There he was trained as a pilot and flew the F4U Corsair during WWII. After the war, in 1945, while stationed at Miramar Marine Corp Air Depot he left active duty as a Captain and joined the Reserves.

Jerry returned to Kansas City to complete his education and transferred from the Marine Corp to the Navy to obtain his medical degree. Sometime during this period he met Mary Jane Smith on a blind date. She always said she fell in love with him through his letters and they married on June 6, 1948. They were married for 59 years until his passing in 2007.

After obtaining his medical degree Jerry was called back to active duty with the Navy during the Korean War where he was trained as a flight surgeon and spent time overseas in Korea. After Korea he made the choice to continue his military career as a doctor. Jerry’s career as a Radiologist for the Navy took his family all across the United States. While stationed at Bethesda Naval Hospital in the 1960’s he performed a medical procedure on President Lyndon Johnson. Captain Dobel retired from the military in 1972 after 30 years of service.

Jerry and Jane had 4 children, 7 grandchildren and 12 great grandchildren. As a family they enjoyed summers camping on the Colorado River, cross country trips in their Cortez motorhome, and later summers at Lake of the Ozarks. Jerry and Jane both loved being near the water and eventually settled at Lake of the Ozarks after his retirement from Rees Steely Medical Group in 1985. He kept his medical license active until the age of 87 continuing to learn and take the board test.

Jerry was smart, dedicated, accomplished and a man of few words. He was a caregiver of all including parents, siblings and children. He had beautiful blue eyes and a charming smile. He enjoyed tennis, golf, steak and beans, the Irish Tenors, and ALWAYS a good western. He was often found tinkering in the garage wearing a blue or khaki jumpsuit and using excess amounts of glue, duct tape, and screws.

Jerry’s life motto: NEVER GIVE UP!