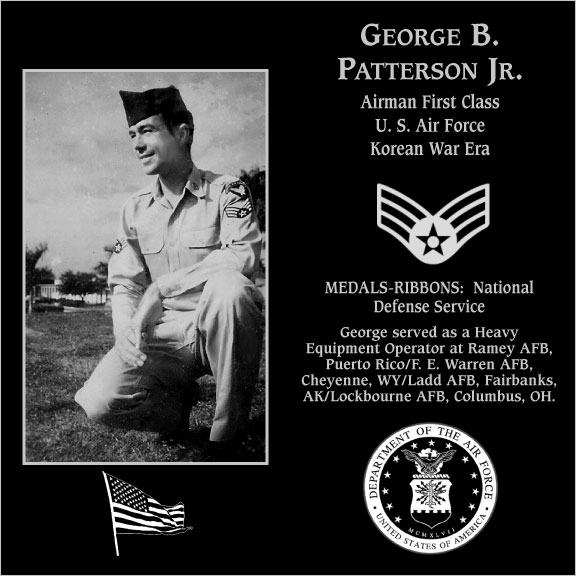 George Bernard Patterson, Jr. was born in Washington, Indiana on June 25, 1929 to Julia Ann Action and George Bernard Patterson. There were a total of 4 children in the family. One son, named Joseph died in infancy. Beulah, George, Gloria and Judy Patterson. This was the Depression era and The Patterson family learned to ‘make do.’ George Sr. worked at the Washington Newspapers (The Herald and The Democrat) as a Job Printer and later he joined NWSC Crane in the Crane Print Shop.

George was called “Buddy” “Bap” and “Bapples”. His father was sometimes referred to as Bud Patterson. The Bap and Bapples nicknames came from childhood friends. Apparently some kids thought the blending of Buddy and Apples – made sense to refer to him as “Bapples.” He attended St. John’s Elementary School and Loogootee High School. He played basketball and recalls his favorite subject being Math. His mother always claimed he had a great singing voice. At 17 years old, George bought an Ice and Coal distributor in Loogootee and named it Patterson Ice and Coal.

George decided he wanted to fly and went to the apple orchard and gave it a whirl. He didn’t fly that day, but volunteered to join the Air Force when The Korean War broke out on his 21st Birthday - June 25, 1951. George consulted with his first cousin Louie De Vault and was advised the Air Force would always keep a roof over his head. George served as a heavy equipment operator in various air bases including Dayton, OH, Cheyenne, Wyoming, Fairbanks, Alaska, Columbus, OH and Puerto Rico.

His father died suddenly at age 50 from an undetected blood clot. George, Jr. was home on leave and saw his father in the hospital. The shock of his father’s death summoned George to get a “hardship leave” from the Air Force and take responsibility for the welfare of his Mother, Julia and youngest sister Judy who was in high school at the time.

George took what money he had saved in the Air Force and built a “basement house” in Loogootee. His goal was to have running water and an indoor bathroom. He purchased a book titled, How to Build a House for $5000 and began construction. Two of his brothers in law assisted him when they could, and George hired some young high schoolers for labor when he needed it. One of these high school laborers recalled what a role model George was to him and other young teenagers that he hired. He even took them to their 1st professional baseball game in his car ---Cardinals vs Cincinnati Reds.

His sister, Gloria Patterson worked with his “future bride” Mary Kay Morgan at Larkin Bros. Department Store in Loogootee. Mary Kay was the oldest of 7 children in the Morgan Family.

George and Mary Kay married on February 23, 1956 at St. John’s Catholic Church. George was employed at Harris Printing and Mary Kay at Gypsum at the time. They initially lived in the basement home George had built for his mother and sister. George would work during the day and then hammer at night on the upstairs in anticipation of making a home for himself and his bride. They had seven children:

George was raised in a generation that was taught to be humble and not desire recognition. He would tell his children: “It’s nice to be important, but it’s more important to be nice.”

George left Harris Printing to work at NWSC Crane in 1962. He began loading trucks but was offered a job in the Crane Print Shop. He stayed there until he retired at age 60. Upon retirement, he spearheaded a project to document the 150 year history of St. John’s Catholic Church. This effort resulted in the compilation & publication of the St. John’s History Book.

George and Mary Kay celebrated 60 wonderful years together in February 2017 surrounded by their children, grandchildren, great grandchildren and other close family members.. On June 26, 2019, he passed away peacefully - one day following his 90th birthday. He lost “the love of his life” only 20 months earlier and struggled to cope without her.

He had community, friends, family, love and faith. He has left us a legacy of character and modeled success as: lots of laughter, love, serving others and doing the task at hand to the best of your ability.

Sometime during George’s life, he wrote some words and a prayer for his life. We think the early loss of his own Father made his keenly aware of the importance of each day.

These are his written words: when my time on this earth ends…….

· I hope I have made a difference in this life of people for the better.

· I hope in some small way the world is a better place.

· I hope my parents and family are proud of me.

· I hope I am forgiven for the unkind things I may have said or done against my neighbor.

I hope I will die in the state of grace and join the Lord God in all His Glory.

“Heavenly Father, Lord and Savior of us all, make us one in all that we do….in the name of your son, Jesus Christ.

Open our mind and heart to those things that are pleasing to you. Help us to focus on our promise to do your will in all things and forsake those actions that divide.