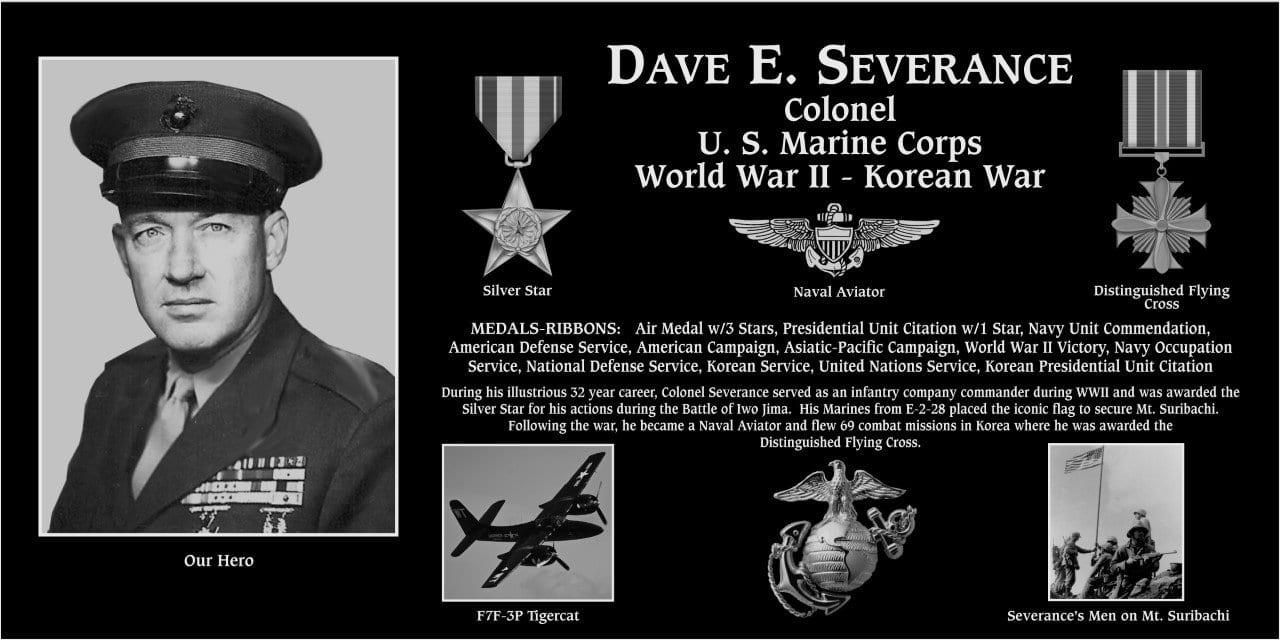 MARINE CORPS RECRUIT DEPOT SAN DIEGO, CA (July 16, 2020) – The Marines and Sailors at Marine Corps Recruit Depot are proud to partner with the Mt. Soledad Veterans Memorial Association and the Day Family Foundation to recognize the enduring life and service of San Diego native Col. Dave Severance during a ceremony at Mt. Soledad Veterans Memorial Park at 10:00 a.m. on July 25, 2020. Colonel Severance retired from the Marine Corps in 1968 with 32 years of service, leading Marines in combat on Iwo Jima in World War II and flying nearly 70 missions in Korea as an aviator.

As a resident of La Jolla since the late 60s, Col. Dave Severance has epitomized the enduring connection that the San Diego community has with its Marine Corps. The centurion was born in Milwaukee in 1919, and grew up in the eastern foothills of the Rocky Mountains – in the then small community of Greely, CO. Colonel Severance found his way to San Diego after briefly attending university in Seattle when he completed recruit training at MCRD San Diego and served in the Fleet Marine Force. Eventually stationed in San Diego with the historic 8th Marine Regiment, Col. Severance excelled as a young enlisted Marine and reached the rank of sergeant before attending officer candidate school to earn his commission as World War II began to escalate.

As a platoon commander in 1943, Col. Severance faced the Japanese Imperial Army and valiantly led his Marines to victory in the battle of Bougainville Island on Papua New Guinea. After a short return to the United States, Col. Severance was given command of Easy Company, 2nd Battalion, 28th Marine Regiment, and began preparations to return to the Pacific – not knowing that their destination would be one of the most deadly battles in history. The now historic Easy Company has been immortalized through films, books, and television series for their heroic actions during 33 of the 36 day Iwo Jima campaign, and inspired a nation by raising a flag on the top of Mount Suribachi – captured by Associated Press photographer Joe Rosenthal. For his actions commanding Easy Company, Col. Severance received the Silver Star for conspicuous gallantry and intrepidity.

Colonel Severance’s other assignments included: 1950-Aviation Instructor, Marine Corps Schools, Quantico, Virginia; 1955-Marine Corps Inspector General Staff; 1958-Commanding Officer of Marine Squadron VMA 223 at MCAS El Toro, CA; 1960-Operations Officer on the staff of Commander, Naval Forces, Continental Air Defense Command, Colorado Springs, CO. In 1962, while serving as G-1 of the First Marine Air Wing in Japan, he was promoted to the rank of Colonel. In 1963, he served as the Commanding Officer of the Marine Corps’ largest Marine Air Reserve Training Detachment located at Floyd Bennett NAS, Brooklyn, NY. At the time of his retirement in May 1968, Col. Severance was serving as Assistant Director of Personnel, Headquarters Marine Corps.

Since 1974, in addition to volunteer work for the Veterans’ Hospital and the San Diego Aerospace Museum, he has served as the volunteer Secretary/Treasurer of the World War II Marine Parachutist Association.

Colonel Severance and his family are scheduled to attend the private ceremony, and members of the public are welcome to watch the ceremony live at: https://www.facebook.com/1MSMA/

Members of the media are welcomed to attend the event while maintaining safe social distance at the Mt. Soledad National Veterans Memorial, located at 6905 La Jolla Scenic Drive South, La Jolla, CA 92037. The memorial is open daily from 7 a.m. to 10 p.m.